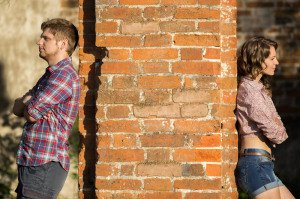 For a long time, I thought that a fight is a fight—end of story. Did you know; however, that there are 3 different fighting styles? And did you know that identifying your style of fighting with your partner could be very beneficial because you gain a better understanding of what happens when you fight. The more you can understand your fights, the less power they have over you and your relationship.

When I first started my trainings in Emotionally Focused Therapy—therapeutic approach to working with couples—I was ecstatic to learn that we shouldn’t be judging the quality of our romantic relationships based on the negative impact of our arguments. Why? Because all fights have positive intentions underneath them. We just have to take time to truly understand what these intentions are.

Brent Bradley and James Furrow, in their book Emotionally Focused Couple Therapy for Dummies, explained that whichever fighting styles we have, we have that style for a good reason, even though it doesn’t work well for us. Let’s remember that these “fighting styles are not character defects and they are not permanent.” Also, there are no better or worse fighting styles. These styles are simply ways that we deal with our emotions in times of disagreements. They don’t define us—they just are; they don’t bring any resolution—they keep us fighting.

Here are the most common, 3 fighting styles:

Couples who take on this fighting style often have very loud arguments. In fact, these arguments can get so intense that couples describe them as if they were on the battlefield. Reactive emotion such as anger becomes dominant. Softer emotions, such as sadness or hurt are out of the picture—and out of the awareness. If you ever heard a classic “car key fight” (where he loses his keys, she screams at him not knowing where the keys are, and he screams back blaming her for the lost keys), you might have witnessed a classic attack – attack fighting style.

In this fighting style the theme of the fight is no longer “battlefield” but it is more of a “tit-for-tat” one. Instead of an attack, a partner defends. More attacking causes more defending and vice versa. For example, one partner forgets about their wedding anniversary. The second partner attacks—“How could you forget?”—while the first one defends—“I was so busy and then I just forgot.”

Couples who use that style might have used one of the prior two styles; however, they literally got too tired and too disconnected to maintain these styles, and that caused them to move to silent – silent style. Many couples that I see at my office report that they are so concerned with conflict that they avoid it at all costs—from the very beginning.

What is interesting is that couples with the silent – silent fighting style may either not know how to fight since they have never seen their parents fight, or they learned that they have to do whatever it takes to avoid fights. When one partner gets frustrated about something and the other one responds indifferently, the topic gets lost, nothing gets resolved, and resentment and dissatisfaction builds up.

Do you remember when I wrote that these fighting styles are there for a reason? Let’s think about this. Let’s say that I am the attacking partner. I attack because there is a part of me that has always felt misunderstood, ignored, or blamed. Maybe I grew up in a family where if I didn’t attack, I would get “squished” and buried. Maybe attacking was my only way of showing up in a relationship. I knew that it doesn’t make my relationship any better, but I just didn’t know any other way.

What if I took time to understand what happens for me right before I attack?

Maybe there is a feeling of inadequacy, fear of being invisible, and deep hurt. If all of that is happening on my inside, my attacking on the outside becomes understandable—it simply makes sense. Will I want to share and show my partner these softer and more vulnerable parts of me? No! Why? Because maybe I tried showing these parts of me in the past but they somehow got squished, and my biggest fear of being ignored confirmed itself. What will I do instead? Attack! After all, it is safer that way! So, the reason or function of my attacking is to protect myself. Does it excuse my actions? No! Does it give me more understanding about my fighting style? Yes! In fact, it gives me a place to start working on my relationship.

Start paying attention to your fighting style. Did it change over years? Do you have the same fighting style with your parents or friends? Did you ever try to “change” your style, but than you somehow ended up fighting in the same way? I would love to hear your thoughts about this topic. Don’t be shy—remember, we are not our fighting styles!